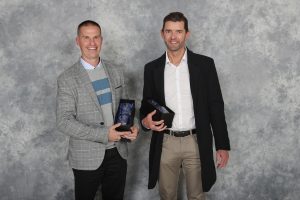 Jon has been involved in Westminster and SAAS sport across a number of activities for 21 years.

He has had a strong connection with Primary sports at Westminster, through junior year 3-4-5-6 Basketball.

He has also taken Westminster SAPSASA Basketball sides from 2002-2018.

Along with his involvement in Basketball Jon has also been involved in Westminster SAPSASA Athletics from 2006 – 2020.

His talents also include assisting the Westminster 1st XVIII side in 2020 and 2021 as a game day assistant and in a fitness role.

Adam established and coaches the Westminster Running Club. This club has been in place for 16 years and still going strong through Adam’s involvement.

This group has helped prepare students for co-curricular sporting teams, as well as district, State and National Cross Country and Athletics championships involving students competing in the 50km, 100km and Ekiden relays.

Adam has also spent 5 years as the Physical Conditioning coach for the Open Football and Netball teams.

Along with these roles Adam has spent 5 years as a cricket coach with another 2 years in the coaching positions with Football and Volleyball.

Back to News Index